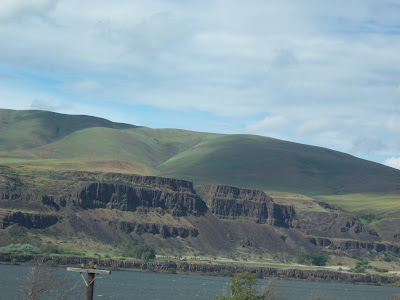 I really needed to leave it all behind…studio, work, home, children and even my beloved dog, Jilly. It was time for an adventure for both my husband and I. See new places. Map our way through unfamiliar territory. Enjoy long periods of the silence and the changing landscapes of the open road.


My husband and I have always wanted to see the Grand Canyon. He suggested taking the trip a few years back, but with all the changes we were experiencing then, an adventure into another unknown was not appealing. 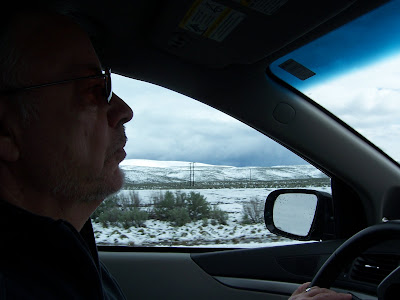 What I didn’t know then, was that he’s wanted to trek to both Bryce and Grand Canyon for decades. And even though he was in the marines, stationed in Yuma, Arizona, he never made it there. So, when I mentioned a few weeks ago that we could take the trip, he was ready to pack up and leave within days. I held him off a week to do a little planning, like book hotel rooms near the national parks, get maps and AAA trip planner at least. Good thing we planned a little because the hotels and parks were crowded with people even though they’d just opened for the season.

Although we had 2 cell phones, 2 laptops, 2 digital cameras, an iPod, and gps with us, we didn’t use them much at all.

What did we rely on? The printed AAA trip and park maps were our main guides. The cell phones got used as additional cameras for the most part with a few calls to check in with kids and dogs. If we listened to music at all, we used the car’s CD player but on the way back, we relied on local radio. What was even better was hearing live local voices talking about live local events in the towns we passed through along with great music.

I thought I’d blog along the way, but it just didn’t happen. What happened was a lot of looking out the window. Watching rolling hills, mountains, valleys, high desert plateaus, canyons, cities and farmlands in Oregon, Idaho, Utah, Arizona, Nevada and California pass by with rain, snow, sunshine and temperatures ranging from 30 to 88 degrees. 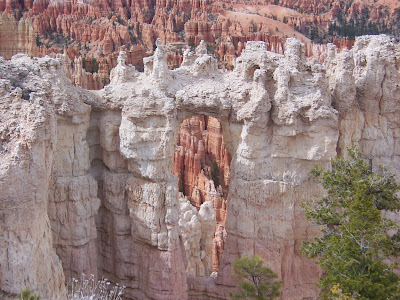 I’ll be posting more about the trip with pictures and journal snippets, now that I’m back from my blog-cation.
Posted by Susan Gallacher-Turner at 8:48 PM No comments: 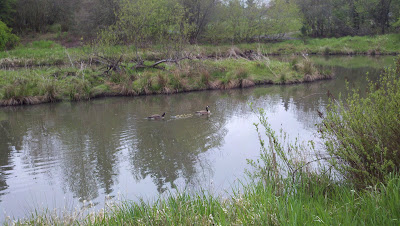 The goslings are out floating in the lake alongside their proud and protective parents. It’s always a joy. I wait for their birth each year, but I noticed something different this year. Maybe it’s because they were floating in the lake on an overcast day, but here’s what I saw: yellow green fuzz balls floating on the lavender gray lake. The yellow-green color just jumped out at me, and I realized that although I’ve been watching and taking pictures of the goslings for years, I’d never really seen their true color.

Why were they this color? To survive. Their yellow green color matches the new grass growing up around the lake, making it harder for hungry eagles, hawks and herons to spot them from above.

That got me thinking.

How many times do I, too, clothe myself so as to mix in with the scenery around me? I can see that to be accepted is really a deep seated survival need implanted in me and not a sign of weakness.

Maybe there’s more here…and then I saw it. The goslings yellow green fuzzy camouflage allows them to grow and develop in a safe environment. When they’ve grown big enough to go out into the world, they shed their fuzz for bold white and black feathers.

That got me thinking.

Creating new work, as an artist or writer, requires a certain fuzz factor. You need a bit of camouflage to protect you from those swooping critical voices. You need a soft fuzzy, solitary space in which to grow and develop your work.

When will I know that my fuzz in gone? How will I know I’ve grown enough feathers to get out there and fly? Notice in the photo below, the goslings are darker, growing out of their camouflage. Maybe it'll happen for me, just like it happens for them. Naturally. 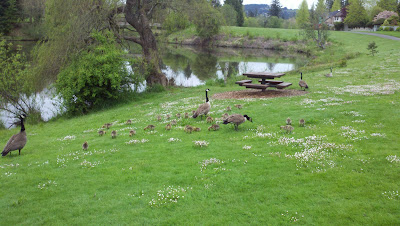 Posted by Susan Gallacher-Turner at 7:24 PM No comments:

I got a new computer. “Yeah,” you say. Well, so did I, believe me. When the abundance of life and a really, really good deal came my way, I jumped and bought a brand new economy laptop.

It was synchronicity. I know it. My old laptop was warning me over and over that my ‘disc space’ was limited. It was taking as much time to make coffee as it was to boot up. And it was running Windows 2003 which was brand spanking new, then. My old computer had 38 gigs and my new one has 500.

Ok, so it was time. But I believed, foolishly I now know, that it would be a snap to go from old to new. No way. It’s been 2 weeks and I’m still mistyping in this new keyboard. My files are still not all loaded from old to new. And although I’ve been using Windows every day for years, the new Windows has so many bells and whistles; there is a learning curve here.

I’m frustrated. I’m no tech pro, but I’m not a newbie either. I’ll tell you, this new laptop has me feeling like I’m starting all over. Every day, I think, this will be the day that it all comes together and all the files are loaded and easy to access and I’ll be blogging away again.

Not. Blog interrupted has not only kept me from writing and posting but also from reading and commenting. All my browser bookmarks are not loaded into the new system and my new internet browser is fighting with my old one.

There’s good news. While my laptop loaded in fits and starts, I’ve been working in my studio to meet a challenge deadline. I’m sure I’ll have photos and get my new laptop to cooperate soon.

Until then, I hope that there’s no blog interrupted in your life and things are all running smoothly for you. Oh, by the way, the reason there's no picture is that I have yet to load my picture software. :)
Posted by Susan Gallacher-Turner at 5:35 PM No comments: