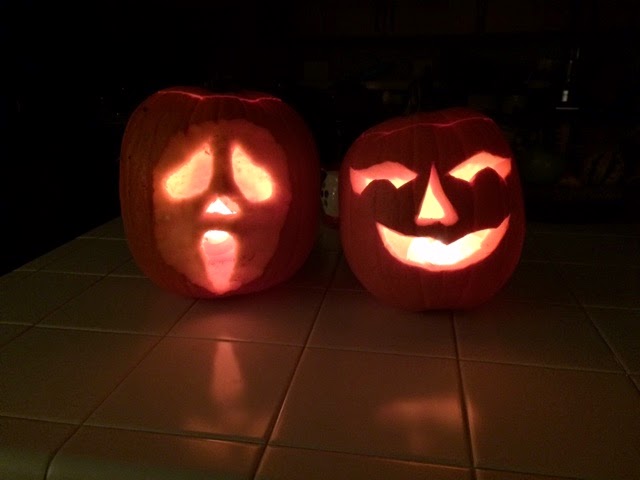 Many people celebrate Halloween today.  Tricks.  Treats.  Costumes and parties abound.  But what they may not realize is that they are re-enacting ancient, seasonal celebration.
Today is the Celtic New Year's Eve.  Tomorrow is New Year's Day.
The Celts, an ancient civilization that lived across Europe with groups living in what we now call Germany, Spain, France and the British Isles.  This was a huge culture that shaped centuries of European customs which were then wiped away or re-shaped by the overthrow of  Rome and Catholicism.  I won't go into the hows, whys and horrors of the cultural genocide brought on by the Catholic church.  Let's just say that in order to take over, the Catholic priests found many ways to take what were considered 'pagan' rituals and re-invent them as 'religious' holidays.  Halloween, Christmas and Easter are just a few examples.
Samhain, pronounced Sow-when, was the Celtic festival marking the end of the harvest with a celebration of bounty and abundance.  As the end of the growing year, it also marked a time to remember those who died and honor their lives and spirits.
Children went door to door giving and receiving food.  Candles and fires brought light to the darker days and served to remember and honor the dead.  The Day of the Dead celebration is another outgrowth of Samhain, as well.
I love Halloween.  And I love seeing how this holiday still honors the ancient intentions of Samhain.  Happy New Year's Eve!
Posted by Susan Gallacher-Turner at 11:37 AM No comments: Links to this post 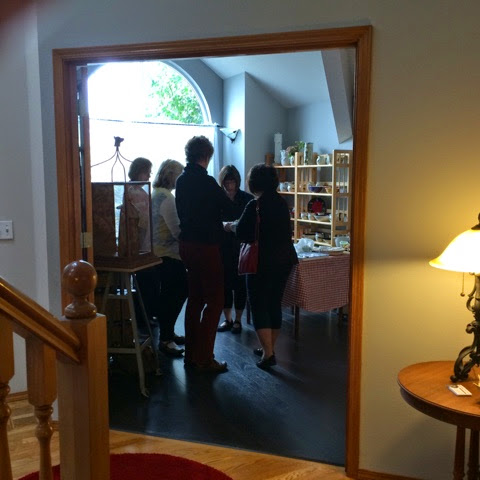 My open studio was just two days last weekend.  I opened my front door to anyone curious about what, how and why I make art.  For 6 hours a day, I did show and tell.
I showed my clay, wheel and kiln.  I showed examples of my thrown vs hand built pieces before they are fired.  I showed my underglazes and how I apply them to one of my masks.  I let them play with clay, too. 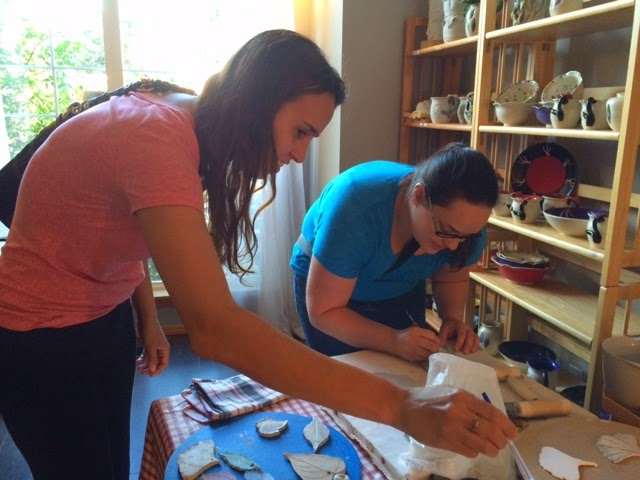 I told them about my own art journey.  It all started with a rebellion against more math and a basic high school art class where I learned a little of everything from calligraphy and watercolor to drawing and clay.
I also showed and told them about my failures.  Then and now. 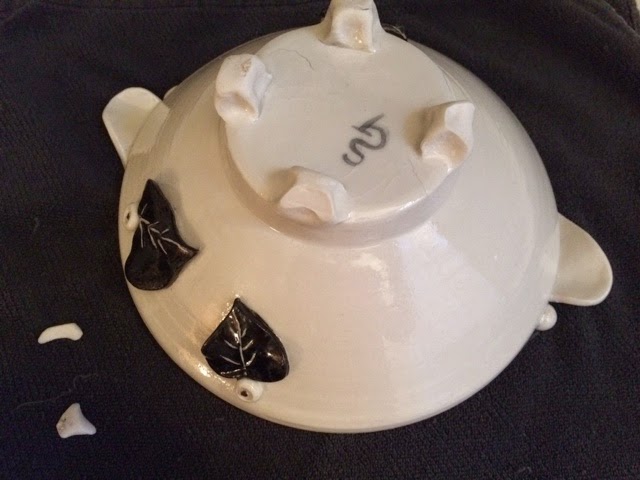 Why would I do that?
Because I don't want anyone to let failure stop them or think they're all alone.
When I started throwing clay, I failed at wheel throwing and threw in the towel on art.
I moved onto writing for my profession while dabbling in watercolor and ink on the weekends.  Many years later, I took a series of very small steps back to art.  Craft classes led to college level drawing, painting, fiber art and sculpting classes.  A small drafting table with watercolors in my bedroom led to a whole room and now two separate studio spaces in my home.  I worked in copper and window screening making sculptures and masks and mixed media pieces which I showed in gallery shows for many years. 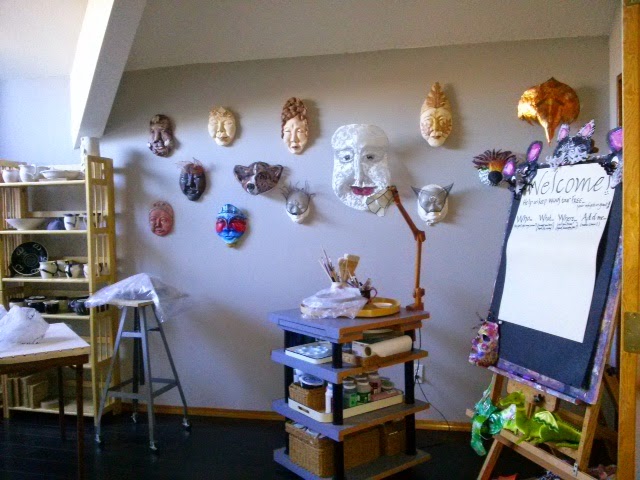 I'd left clay behind until a generous man who came to my open studio 5 years ago, gave me his kiln and pottery wheel.  When I admitted my failure at wheel throwing, he still insisted I take it.  You can read more about this story here and here.
It was the first time I'd admitted my failure out loud.  And my failure didn't bother him, or stop him from appreciating my art and seeing my possibilities. 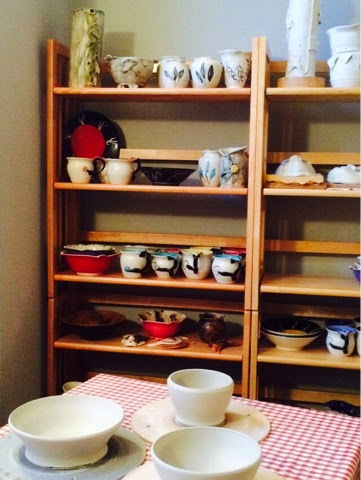 So, yes, I opened my studio.  I showed my work and my process.  I told about my successes and my failures.  And if I can help one person try again, then my failure has turned into success.  For both of us.
Posted by Susan Gallacher-Turner at 7:08 PM 2 comments: Links to this post 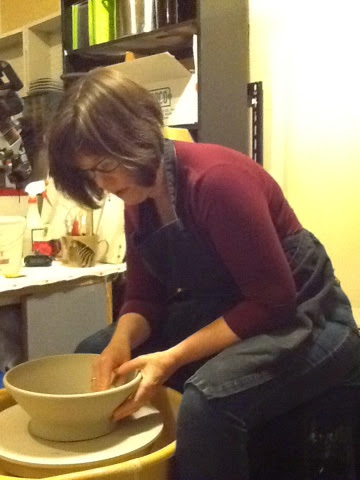 I love doing an open studio tour.  I meet some of the most warm, fascinating people.  I get to show and tell what I do behind the usually closed doors of my studio.  And I always learn something new.

This year has been a little different.  And that's a good thing.

As an artist on the Washington County Open Studios tour, I've made many new friends.  And this year, my new artist friends have been teachers and inspirations.

Terry Howard Grant is a fiber artist who helped me with the group's new blog.  She wrote a great blog about her amazing studio here, which I admit, I wish I had a studio like hers.  I wanted one of her cool, fiber crows and we traded...her crow for my porcelain mug and bowl.  She even put a picture of my mug filled with her morning coffee on her blog.  She did several blogs on using her iPad to do digital drawing and with her help, I learned how to do it, too.

Karen French is a potter who helped me with the group's event listings and online calendars as part of the public relations job I'm doing for the group.  She is excellent at excell.  She is also a wonderful potter who generously shared her raku kiln with me.  Twice now, we have hauled out the kiln, fired up our pots and draped them with horsehair which we finish with paste wax.  Her studio in back of her house is spacious enough for a wheel area on one side and two kilns on the other.  Ok, I have studio envy here, too.

Both of them inspired my approach to public relations this year.  Terry's studio by a bubbling creek was featured in a local Homes & Gardens article.  Karen's horsehair raku and studio set up was featured live on a local TV and radio morning news shows.

I've been a writer for decades, personally and professionally.  And, maybe, I've been an artist for that long too, but didn't know it.  The last 15 years, I've concentrated on my artist side, sidelining my writing to just my blog.  But this year, I've been able to combine them both. I'm doing my own art and using my writing to promote art and artists right in my own neighborhood.

I'm happy to do it and can't wait to open my own studio doors, too.  After I get off the computer and get it cleaned up, that is!  By the way, the Washington County Open Studio tour is this weekend from 11am-5pm, a free map is online at washcoart.org

If you're in the area, come on by!

Posted by Susan Gallacher-Turner at 6:29 PM 2 comments: Links to this post 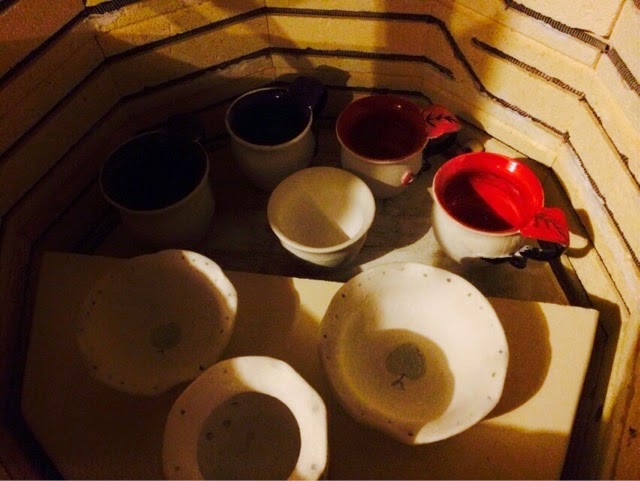 I was going to write about sunsets and inspiration but I'm writing about perspiration instead.
The good, old, honest hard working kind of sweat and the kind that comes with excitement.
Yup, it's been that kind of week.  And while I might feel the strain and pain a bit, I'm happy.
I always feel best when I'm doing something creative and that could be a wide range of things.  It could be picking out new light fixtures or painting a room.  Throwing clay, glazing or making a mask.  Making my own pizza for dinner.  Loading the kiln.  Writing blogs, press releases, pitches, emails to media, setting up interviews to promote my local open studios tour.  Or even, figuring out how to pill my cat twice a day without a struggle. 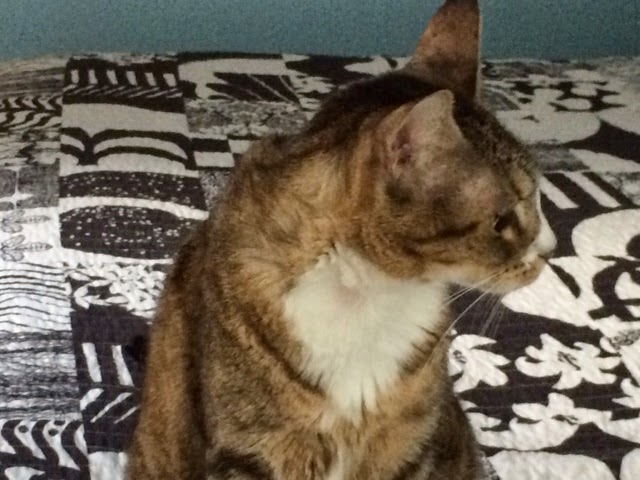 I've done it all this week.
Which is why I'm a day late posting this blog on my own personal blog.  But that's life, isn't it?  If there's one thing I've learned along this winding road of life, it's the bends that make it interesting.  Balance is not a single straight beam that you walk through life on with pious poise.  It's a see saw.   There's up and down and busy and slow. 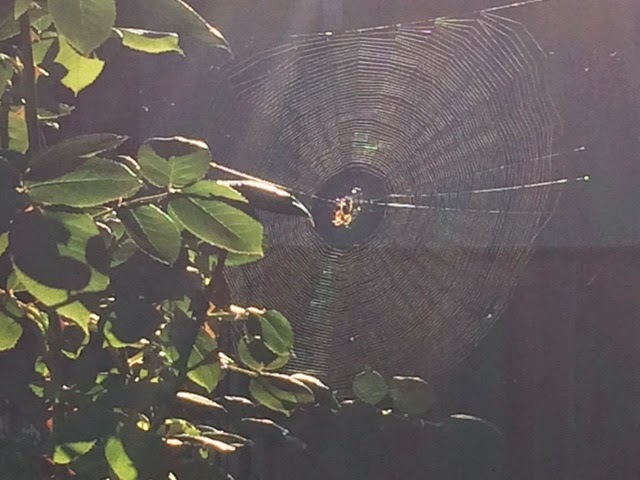 I lloved the see saw as a kid, maybe, I still do.
Hard work is far better than hardly working, in my opinion.  I always feel better when I'm doing something. But there are going to be those slower days, too.  Ah...the see saw of life!
Posted by Susan Gallacher-Turner at 8:20 PM No comments: Links to this post 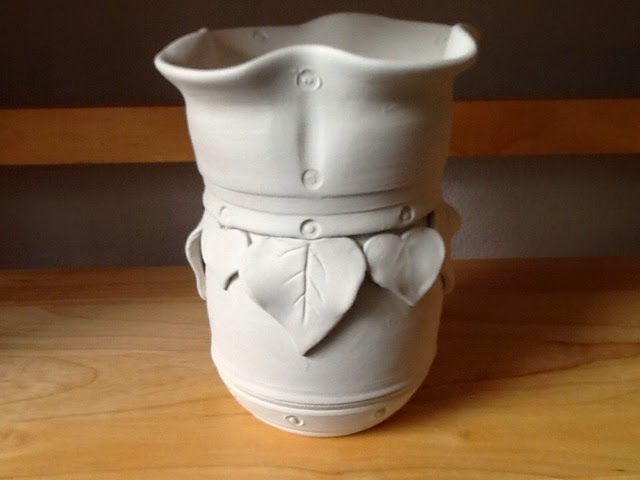 This week, my studio shelves are full again which means it's time to fire up the kiln.  A bisque load is in the kiln now.  While that load cooks, I'm waxing and mixing and getting other pieces ready for a glaze load.  There are pieces to be trimmed and under glazing to be done.

Which brings me to my dilemma: what to do with this vase?

I threw it a few weeks ago as an experiment.  I wrote about it here.  But now, I need to decide how to under glaze it in a way that keeps the whimsical nature of the form but doesn't wind up looking clownish or garish.

Thanks to SketchClub, a handy dandy digital drawing pen and my iPad, I can play with no fear of permanent consequences.  At least, as far as my vase is concerned.

Here are three digital design ideas. I'm not sure I'm in love with any of these designs, they all have draw backs.

The first one feels nice but maybe too much white. 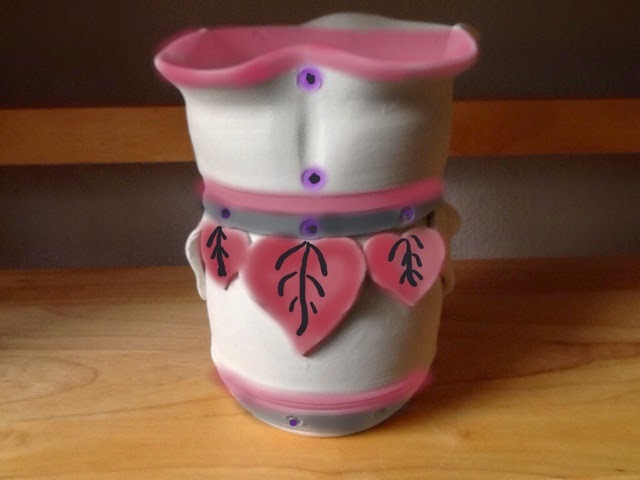 The second one feels like I'm looking at two pieces instead of a whole vase. 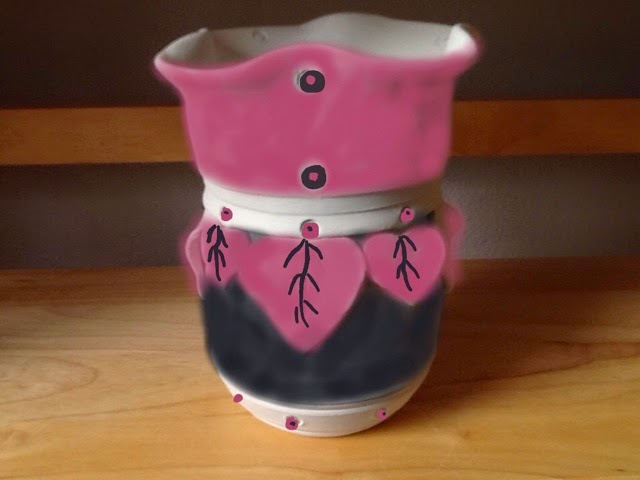 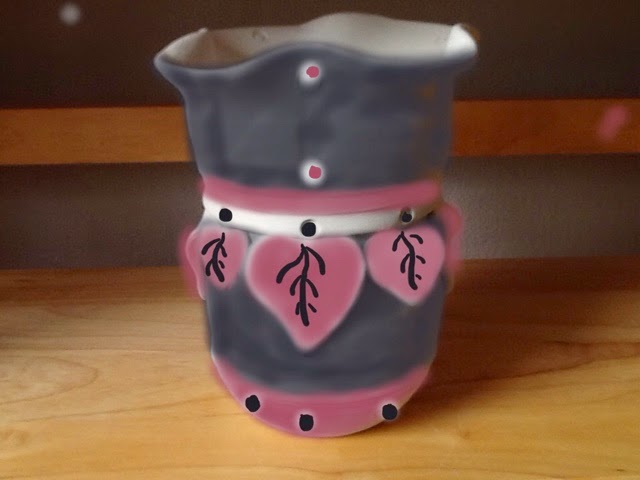 Beyond design decisions, there's the nitty gritty of glaze application.

Although the idea of an overall color with is quick and appealing, it's a bit tricky to get it on the base without tainting the detail elements like the leaves and dots.  To do that, I have 2 options, wax out or wipe out the detail areas.  Both of these options have their drawbacks.

Waxing is a resist method.  Waxing out details works well if you are very, very careful.  Any wax drips or smudges anywhere else on the piece and the base glaze will not stick.  I've had the unfortunate experience of naked patches appearing on what is supposed to be a solid glazed section because of wax drips.  This cannot be fixed and it ruins the piece.  Sigh.

Wiping is an erasing type of method.  The base glaze is applied and allowed to set up.  Then, I get out a sponge and a bowl of water and start cleaning the glaze off the detail areas.  Any areas not well cleaned up, wind up with glaze where you don't want it.  I've had this happen, too.  Sigh.

If I use color in the detail areas, and clear glaze the base, I don't have to worry about any of the wax or wipe issues.  It's easier in that way, but the trade off is having every little hand mark on your clay surface show up, an base glaze can cover up a multitude of clay glitches.

So, while I love playing with design ideas and pondering methods, I know I have to decide and do.   That's the part that always makes me nervous because there's no going back.
Posted by Susan Gallacher-Turner at 1:57 PM No comments: Links to this post

I show and sell my functional and sculptural work through galleries and studio sales. To see and buy my work, you can contact me here or email me at susangt50@gmail.com
To see my newest pieces, click the 'My Art' tab above, and for more of my art, please visit my website Susan Gallacher-Turner Sculpture at www.susangt.com 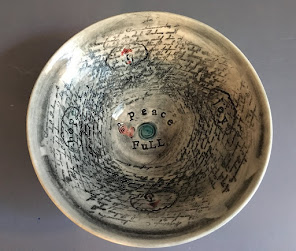 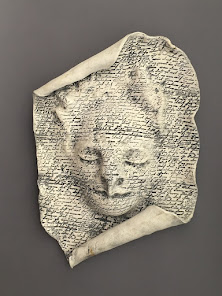 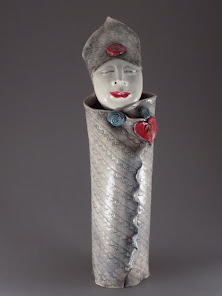