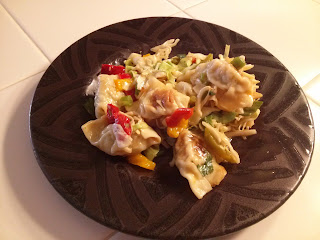 The sun is out in the cool, rainy Pacific Northwest.  It’s too hot to cook.  What do I do for dinner?  Grilling and salads and frittatas were getting old.  As I watched my son gobble up pot stickers, I got an idea.

I headed for Trader Joe’s and gathered the ingredients for the dish.  While I was there, one of the employees asked what I was going to make and I told her.  She liked the idea so much, she went back and made it for their afternoon sampler demo.

What could be better than a cold dish on a hot night?  Here’s the recipe.

Asian Pasta Salad
1 package Trader Joe’s Chicken Cilantro Mini Wontons
1 package shredded cabbage
1 cup sliced bell peppers, yellow, red and/or green or Me’lange ‘ a Trois (frozen sliced pepper mix)
½ cup chopped green onions
½ cup Asian Style Spicy Peanut Vinaigrette dressing
Cilantro for garnish
Brown the wontons in a tablespoon of oil for 5 minutes only.  Thaw the frozen peppers by running cold water over them in a colander in the sink.  When the wontons are browned and cooling, toss the peppers in with them for a few seconds.
Assemble all the ingredients in a large salad bowl: cabbage, green onions, peppers and wontons.  Toss with the dressing.  Add the cilantro.  Chill for an hour or so.
Serve and Enjoy!

Posted by Susan Gallacher-Turner at 1:20 PM No comments:

As the wheel turns: Throwing therapy. 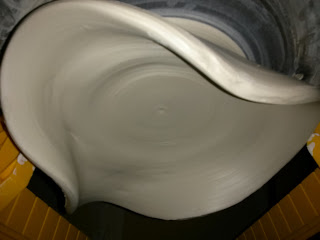 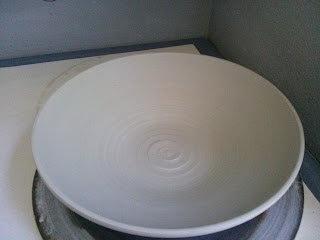 I have a lot of work to complete.   Shelves of bisque ware need to be glazed and fired.   There’s shelves of green ware waiting to be underglazed and bisque.  When I went to throw this week, I had a lot of unfinished business on my mind.

It wasn’t all about the clay.

Nope.  A friend of mine’s dog was put to sleep a few days ago, a dog I helped to take care of for many years.  You can read more about it here.  A family member was hurt by the actions of a selfish and cruel person.  Again.  Another friend is having a difficult time.  It’s not me.  It’s not my pain.  But I feel it all the same.

I was feeling sad and mad.

I didn’t realize it at the time.  I just got out my clay, bats, water, sponges and prepared to throw.  I decided to get out just two 5-pounders not really knowing why at the time.  I usually throw a lot more clay in a session.  Maybe it was the filled shelves filling my mind.   I wasn’t sure.  I just sat down and turned on the wheel.  I threw a nice big bowl.   As always, I wanted it to be bigger but I remembered the last time I pushed the clay too far and ended up with a flopped bowl.  So I took that bowl off the wheel and set it aside. 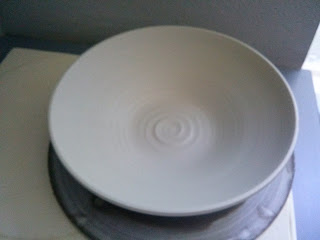 I had a hard time centering.

The next ball went on the bat and wobbled.  It had a bump and a bulge that didn’t seem to want to straighten out. I kept throwing anyway.  In my cupboard,  I have a roundish bowl that I bought a few years back that I use a lot.  It’s a good size and shape for salads but, I now know, it’s not a well thrown bowl.  I had that shape in my mind but it’s not a shape I normally throw.   None the less, in a few minutes, I had a bowl about that size and shape on my wheel. No bumps, bulges or wobbles.

It was amazing at first, to me, that I’d thrown it really without thinking.  But, alas, the mind decided to critique it and decided it was too thick and not big enough.  Can you predict what happened?  Sure you can.  Nice well rounded, good enough bowl turned into a flopped mess in no time.  Determined as ever, I tried to rescue it but it was too late.  Worst of all, I knew it was all my fault.

A different kind of throw down.

Swearing, I took the bat off the wheel and threw it onto the concrete floor.  As it hit with a satisfactory thwap, I just sat there at the wheel.  Completely still, feeling the tears trickle down my cheeks, I stared at the bowl now turned into a plate.  And, other than the edge turned over on one side, it was not a bad plate.  A little convex where it needed to be concave, for sure, but it was even and a good size.  I sat and stared some more wondering if this was how someone a long time ago, discovered the plate?

After my little breakdown, I had a breakthrough. 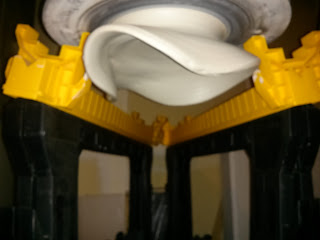 Getting up from the wheel, I picked up the bat and just started to pull the edges up to the center.  It was rough and uneven and well, kind of fun.  I let myself play with the clay creating swirls and twists and a sculptural form appeared.  I could see some of my sculpted creatures residing inside.   I knew, though, that the form would never dry that way, so I put it back on the wheel and let myself play with it some more.  A bowl form emerged once more and the sides flopped again.   But this time, I just turned it upside down.   Maybe it’s not a bowl but a base for a sculpted piece.

Answers appear in the most mysterious ways.

Did I get the big bowl I wanted?  Yes, actually.  I did it the first time. I just didn’t see it.   Did I get the rounded bowl I thought I wanted?  No.  I got something better:  Emotional and physical therapy and a base for a sculpted piece.  Whoever said art isn’t therapy is crazy.

Posted by Susan Gallacher-Turner at 2:05 PM No comments:

It’s a dog’s life. The only problem: It isn’t long enough. 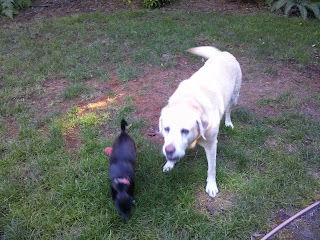 I’m lucky.  I’ve loved many, many dogs in my life.

I’ve been friends with a kick-ass standard poodle named Yankee.  A stubborn but silly Dalmatian named Oliver Twist because he was famous for twisting out of my reach as a pup.  Two Golden Retrievers have blessed my life with very different personalities and challenges.  Mandy was sweet, lovable and so tender-hearted that she died just a few months after my first cat, Bartholomew Jones died from lung cancer.  Heather was a smart, willful, high energy field dog who managed to take down a duck at the park by jumping up and catching it in mid-flight.

These are the dogs that I’ve lived with in my own home.

I’ve dog sat, walked and helped rescue many more.  Flash, the toy poodle, was amazing and aptly named.  Jake, a golden, was a big teddy bear.   Libby, the golden was soulful.  Duke, the giant Doberman, had a heart bigger than he was. 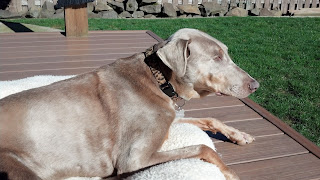 But one of the most outstanding dogs in my memory will be Kariba, a beautiful grey Doberman.  She was rescued by my friend, Chris, and was a high energy, intelligent and particular being from the beginning.  She picked her ‘people’ and if she liked you, it was for life.  If she didn’t, well, you had to get over it.  She’s been well loved and babied through 13 wonderful years.  She’s sweet and tough enough to survive cancer not once but twice.  But unfortunately, the third time isn’t the charm.  It’s the end for her.

I’m sad.  I can’t walk her to the park anymore or wait for her to bring me a shoe.  We can’t play chase or hide n seek in her yard.  The only thing I can do now is rub her ears, stroke her forehead and kiss her one last time.  Then, let her go on, hopefully to a place with endless fields and dog treats and no pain.  And no skunks. 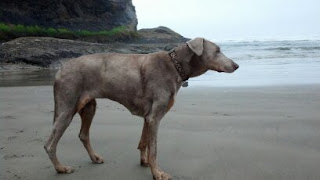 It’s so hard to say goodbye to our four-footed friends.   I want to talk not just to them but with them, explain what’s going on and why it’s time to say goodbye.  And I do.  And I feel they understand but I can’t be sure.

Here’s what I know for sure:   the dogs in my life just don’t live long enough.

Posted by Susan Gallacher-Turner at 10:29 PM No comments:

Getting outside is good for the soul. 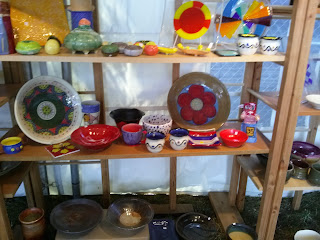 In the morning, I hauled wooden shelves.  Hefted boxes.  Moved pallets from one spot to another.   Helped set up an outdoor tent under the hot sun.   Into the afternoon, I unpacked layers and layers of newspaper wrapped pots of all sizes and shapes.   This weekend, I was just one of dozens of ceramic artists who donated their strength and studio work to the Oregon Food Bank. 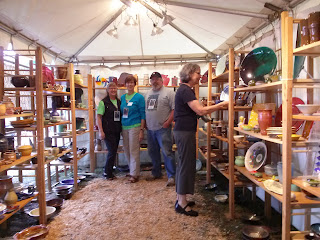 For over 20 years, during the Portland Waterfront Blues Festival, the Oregon Potters Association’s Empty Bowls sets up a booth, sells pottery and donates the money to fill the needs of the hungry in our community.  For years, I’ve bought other artists’ bowls at the booth and I still do.  But now, I also give my own bowls and cups to fill up the booth, too.  I also arranged cups, bowls, plates, vases, jars and sculptures.   And wrapped up purchases and thanked everyone for helping the hungry.

Here’s the best part, many of the people who bought pottery have been coming to the booth and buying bowls for decades.  One man told me he has a special set of shelves that show his collection of little tea cups he’s bought over the last 20 years.  Others are amazed at all the beautiful pottery and amazing prices all for a wonderful cause.

I’ll admit, I don’t relish hoisting and hauling.  It’s not the job itself but my worries about whether I’ll be up to the task.  The answer to my worries:  I am strong enough to lend a helping hand.  Even when I was tired out, I felt good.

This week filled with outside work filled me up in more ways than one.

Posted by Susan Gallacher-Turner at 2:40 PM No comments: