Clay and the beauty of nature. 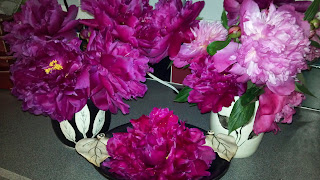 The peonies are popping up all over my yard right now.  The rain is pouring down on these luscious, scented beauties and if I don’t pick them now, they’ll wilt into mush.  This year, instead of watching them wilt away, I am cutting with abandon.

This is one reason I love what I do.

I throw clay.  I make functional and sculptural pieces. So, I have dozens of vases in various sizes sitting on the shelves in my studio.  Short ones.  Tall ones.  Skinny ones.  Fat ones. 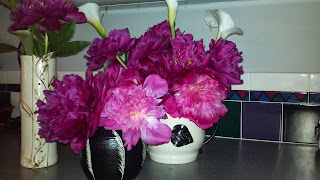 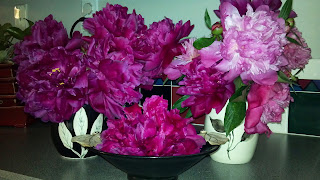 These are pictures of some of this morning’s peony picking nestled in my vases.

Happy Spring!
Posted by Susan Gallacher-Turner at 2:03 PM No comments:

Email ThisBlogThis!Share to TwitterShare to FacebookShare to Pinterest
Labels: Around the house, clay, Creativity, Seasonal musings 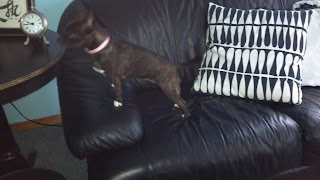 Two weeks ago, my son and his little dog, Apple re-joined our household.   Apple is a 2 year old American Toy Terrier/Boston Terrier mix.  She has the boundless energy of a young pup and the intelligence and stubbornness of a terrier all wrapped in a 7 pound body.   Raised in an apartment, she hasn’t had much opportunity to go for walks, see a variety of dogs and people.   That means Apple had some leash aggression and house training problems.


It was time for her to learn how to fit in with Jilly, Terra and the world at large. 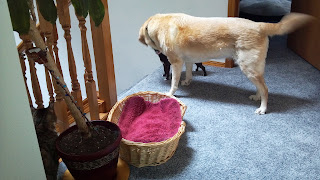 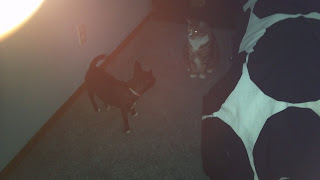 Training.  It’s so necessary and so easy to let it slide when life hands you other challenges, especially with a small dog.  But…and I say this in a tough love way…it’s even more important to train your dog to have good manners for their comfort as well as yours.  Big or small, dogs need to know what is expected of them in the world.  And it’s your job as a dog owner (much like parenting) to teach them socially acceptable behaviors.  Ok, I could go on and on about the importance of training and the lack of it in most dogs I see around me.  It may seem overwhelming to train your dog but it’s not.

Just like life, you take it one step, one command at a time.

The biggest challenge here wasn’t basic potty training, it was dealing with anxiety.  What I observed (ok, people another hint: watch your dog, when they’re upset or anxious they will act out.)  was that when I was sitting or working in one spot, Apple was calm.  When I was moving around the house, cooking or cleaning, Apple was running around panting.  Eventually during these times, she would poop in a corner.

Here’s how I dealt with this problem.
First, Apple went outside to go potty at the same times each day.  When she went potty outside, she got a treat.  Second, I crated Apple or kept her with me in one room or area during transition times to give her a sense of security.  After a week or so, she started to anticipate the schedule and I could tell she was calming down.  Then, after I put her out to go potty, I let her be out of her crate for a short time during transitions.   Now, she poops outside in the morning and lies in her bed during transition times.  Accidents are fewer and farther between.

The first new command I added was UP.  With a treat in hand, I said, “UP” and picked Apple up.  Then, she got a treat.  It didn’t take her long to figure it out.   Apple is very smart.  And it helps that she loves treats and wants to please.

Why did I teach her UP?  This is strictly a small dog command.  What it does is let the little dog know that you are going to pick them up, so they don’t startle or squirm in your arms.  It’s safety command, too.  With a little dog, there are times when you are going to have to pick them up quickly to keep them out of harm’s way.    When Apple hears me say it, she now jumps up a little into my arms.

Next, training task: walks to the park on her new Gentle Leader collar. 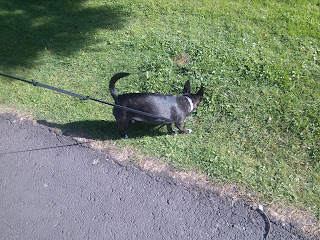 Ok, this took some getting used to for her.  Like most dogs, she tried to get it off her muzzle at first.  But, I told her to ‘leave it’ and kept walking.  When she started calmly walking with it, she got a treat.  It took her about two blocks the first day, one block the next, then half a block.  Now she jumps ‘up’ into my arms, I put on her Gentle Leader and off we go to the park.  She loves her morning walks!

Next training task: Learning to pass people and other dogs without growling, pulling or fussing.

It took two and a half weeks.  With a combination of correction when Apple growled and praise when Apple walked by sweetly, she is now walking along with no problems.  Apple greeted an Airedale Terrier yesterday with a wag of the tail and a kiss on the nose!  Success!

Yes, it’s work.  But when it works, everyone can relax and enjoy life so much more!
That’s the real benefit of training.  Apple isn’t a terrified terrier who snaps and growls but a happy puppy. 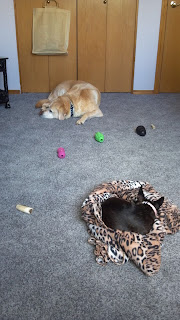 As the wheel turns: Out with the old, in with the new. 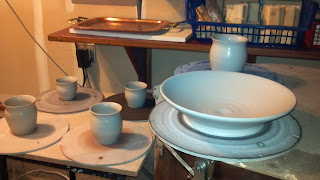 Yesterday, I picked up 200 pounds of new clay.  I also unloaded 100 plus pounds of old, bad clay that caused a problem called ‘bloating’ in my recently fired work.  You can read about the trials of the problem here and here.  It was very disappointing to say the least.


But that was then, past, old.


Then, I saw the shelves of bumpy bowls and heard my inner voice scolding me for my mistake.  My lack of expertise.  My problem to solve.  I dove head first from the pit of disappointment into a mountain of firing and glazing experiments.  I did not find the answer there or then.


It was the clay.  Mixing a simple earth material like clay into the porcelain that I throw on the wheel is a complicated process.  Components are added in specific amounts at specific points in the process.  If too much of one element is added at one point, the clay is out of balance.  No one can see it or feel it until the clay is fired at the final stage.  Then, this material swells, fills with air and forms bubbles inside and outside the bowls or mugs.  It looks and feels like the pieces have a rash and it’s not pretty.  But it’s not my fault or problem or mistake.  It was the clay manufacturer’s mistake and they gave me new clay.


Today, I sat down at my wheel and threw to my heart’s content.  I felt a surge of energy as each lump of clay whirled into a mug or bowl.  My son asked me to make him a ‘really’ big coffee mug.  So I did.  Then I threw my kind of smaller tea cups.  And I threw a nice, wide serving bowl which I can’t wait to sgraffito.


Yes, I tossed out the old clay and got 8 new bags.  But what I really unloaded was self-blame, guilt and shame.  What I picked up was new knowledge, self-respect and creative energy.  That’s a wonderful new feeling to have as the wheel turns.
Posted by Susan Gallacher-Turner at 9:19 PM No comments:

Springing forward while sitting back. 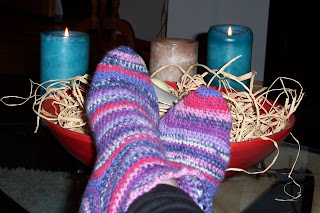 Is it possible to move forward without actually moving? That’s a question I’m asking myself this week after an accident on Saturday injured my foot. I can’t walk very far or fast right now, and for me, that’s a difficult place to be. I know, I’m a busy bee and I try to embrace the Zen idea of non-doing, but I do like ‘to do’, maybe too much.

Perhaps, that’s a clue – too much.

After months of throwing, hand-building, trimming, glazing and firing, I was excited and disappointed. Some of the work turned out better than expected and some not. Either way, I had to keep moving. There were forms to fill out, tags to make, delivering and volunteering to do. I stood and smiled and welcomed and helped at the local ceramics showcase. I talked to friends I haven’t seen in a long time and met some new ones, too. It’s the biggest show I’ve ever participated in and the biggest ceramics show in town. As I stood at the doors greeting over 1,000 people on Saturday morning, I smiled and watched beautiful work walk out the door from hundreds of talented ceramic artists. It was amazing and humbling and inspiring and overwhelming.

Perhaps, that’s a clue, too – amazing.

I had a great time and now it’s over. And, coincidentally, on Saturday after my shifts were over, I fell over. It was a silly accident. I tripped, fell to my knees twisting my foot and now have to spend time each day sitting still. I can walk, but I have to go slowly and stay on even ground.

Another clue – stay on even ground.

So, here I sit. Looking out the window at a beautiful, blue, cloudless sky and chartreuse leaves sparkling with sunshine, I wonder. There is such a big world out there and so many places to go, things to do, dreams to dream and ideas to try. I want to get moving. Just then, my eyes catch the flight of a hawk overhead and I want to soar with it. But, I can’t.
Outside, spring blossoms out and birds fly forward while I sit back and watch for a bit.


Posted by Susan Gallacher-Turner at 7:02 PM No comments: