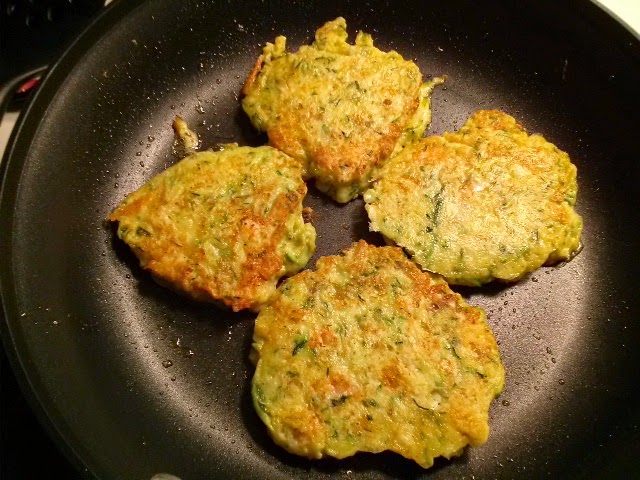 You know it's really summer when there is zucchini in the garden.  Inspired by my daughter's question about what to do with too much grated zucchini, I created this dinner.  I've been asked for the recipe, so here it is.
​
But first, a confession: I've done a lot of things in my life (and plan to do much more, hopefully) and one of those is foods and nutrition training.  That involved learning about the chemistry of foods and test kitchen-like lab training.  When I want to make something I haven't made before, I figure out the basic method.  In this case it's a pancake with savory components.  Then research related recipes, hone in on what I have at hand or want to use, and make my own recipe version.
Hope you like it!!
​
Zucchini and Shrimp Fritters
​
Three small zucchini grated
1/4 red onion chopped fine
1-1/2 cups frozen pre-cooked large shrimp thawed and chopped
2 eggs beaten
3/4 cup flour
1/2-1 cup quarto frommiagio cheese (ok, it was about a handful)
Salt
Pepper
Dill weed(two to three shakes of the spice jar, maybe 2 tsp)
Place zucchini and onion in colander, toss with 2 tsp salt and let sit to drain.
Thaw shrimp in small colander under warm water. Then chop.
Press excess water out of zucchini.  Place in bowl, add shrimp, egg, salt, pepper, dill and mix.  Add flour and gently mix with fork. Add cheese, mix.  Chill for about an hour.
​
Heat non stick skillet with 2 Tbsp olive oil on medium heat. Drop spoonfuls of fritter mix to pan.  Fry each side about 5 minutes or until golden brown.  I had about 4 in pan at once. Took them out and put in another batch.  Makes about 8 3" fritters.
​
Serve on bed of spinach with drizzle of sour cream or whole cream yogurt. Enjoy!!
​
​
Posted by Susan Gallacher-Turner at 10:08 AM No comments: 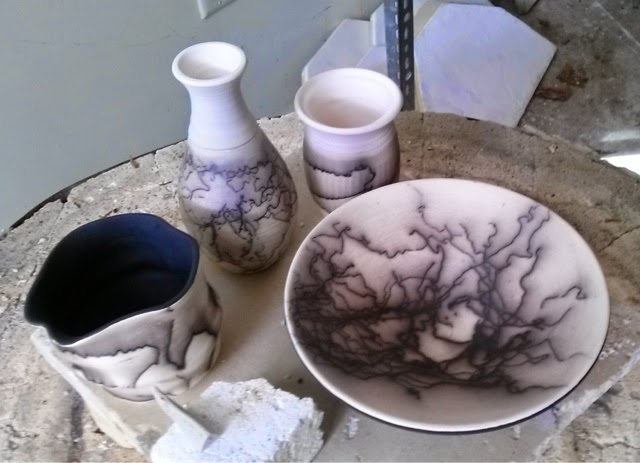 Like a burbling stream on a sunny, summer day, sometimes studio work just flows along.
​
I started out the week joining another potter at her studio to do raku.  I love raku pieces but the process I liked best in my clay classes was doing horsehair raku.  My friend Karen French loves it too, has her own raku kiln, a bunch of horsehair and the generosity of spirit to invite me over so we could raku together.
​
The raku process can be tricky.  Bisqueware has to be reheated up to a specific temperature. Special glazes can be used to create copper or crackle effects, then the pieces are lifted out of the kiln and into a trash can filled with newspapers and left to smoke the pots.  In our case, the heated pots were taken out and horsehair was laid in and on them creating the look of etched black doodles. 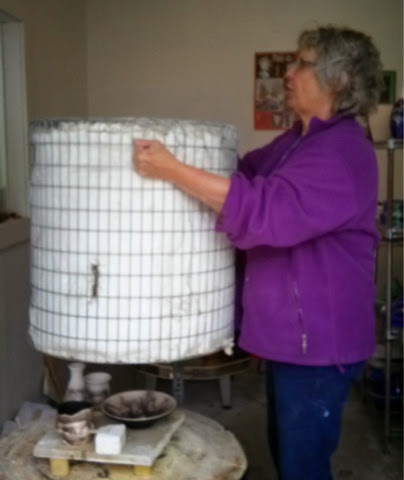 During the process, it rained, hailed and thundered.  Outside, we pulled the kiln under the eves and did the horsehair inside Karen's studio.  Our pieces turned out well but most important, it was a fun afternoon!
​
Tuesday was throwing day.  It was still raining but working in my garage with the mixed sounds of instrumental piano music and raindrops was peacefull and productive.  Even the bowl that stuck to wheel head turned into an interesting fluted star-shaped bowl.  I'll see how that ends up...maybe raku?? 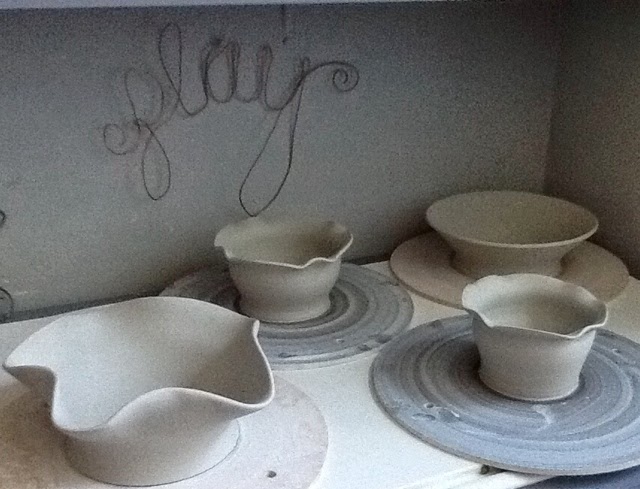 Today, wound up to be a combo day.  Mugs had to be taken off bats, cleaned up and set aside to dry a little before underglazing. A sculpture started last Friday was ready for the next steps; cutting the base down, attaching the top part, making roots and leaves and attaching them to the base. My raku cup and bowl needed finishing with paste wax.  My bowls from yesterday aren't ready for trimming yet.
​
There's still more to do, of course.  It's always an ongoing process creating ceramic work and it's easy, way to easy to feel alone, bogged down and like nothing ever gets done.  Thanks to sharing time with Karen in her studio balanced with my own studio time, this week was filled with good clay days.
​
​
Posted by Susan Gallacher-Turner at 8:31 PM No comments:

East vs West- Rain and Flow. 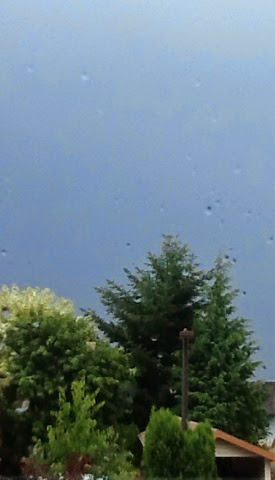 ​It's raining today.  It was raining last week on our last day in New York City. But, it's just rain, or is it?
When we woke up last Thursday in the Waldorf Astoria hotel in Manhattan, the streets were wet.  We had planned to go on a cruise to the Statue of Liberty, but without rain gear, treking 40 blocks to the dock and huddling with masses in a small covered area to click a few far away shots of the statue didn't feel like a good time.  Changing our plans, we headed out toward MoMA to see Van Gogh, Matisse and Monet instead.  Our maid warned us about the terrible weather and to make sure we picked up an umbrella at the front desk.
We smiled and shrugged.  We are from the west coast, after all.
East coast calls it rain.
East coast New Yorkers all carry umbrellas and use them at the slightest drop of rain.  They avoid puddles in a like ducklings in a line afraid of dissolving in water.  This behavior causes more crowding and fast-paced dodging at crosswalks as they all try to hurry along without getting their feet wet.  They have umbrella stands inside every door of every building and they are full to the brim with folded up, wet umbrellas.
West coast calls it mist.
West coast Portlanders never carry umbrellas unless it's a torrential downpour and we're dressed up for an event.  We walk through puddles like the ducks, talking away and smiling at each other.  There are very few umbrella stands around and in the event of umbrella usage, we just put them under our seats, in our backpacks or carry them, if necessary.
The Museum of Modern Art (MoMA) was packed to the brim because of the wet streets.
East coast museum viewers stand in front of everyone. 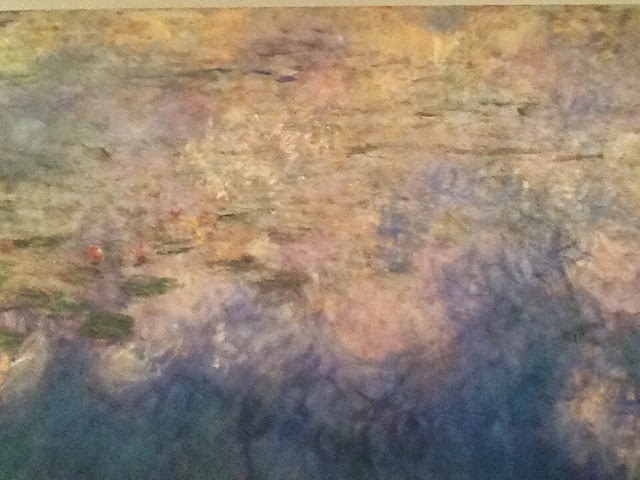 They were rushing from room to room, footsteps echoeing through the building, crowding around the paintings unwilling to let anyone else in closer.  The natives just walked right in front of the crowds viewing the paintings, stopping briefly to see the work.  They push their faces within inches of the paintings.
West coast museum viewers wait their turns.
We move calmly from room to room, no hard heels clicking the floors and only the sounds of hushed voices.  We walk around each other, allowing everyone to get a view.  We stand back from the paintings. If we go in for a closer look, we look around first to make sure we're not blocking anyone else's view.
I'm not critizing.  I'm not advocating one way of being vs another.  I'm not doing the East vs West coast thing.  I'm just observing that the energy and attitudes are completely different. 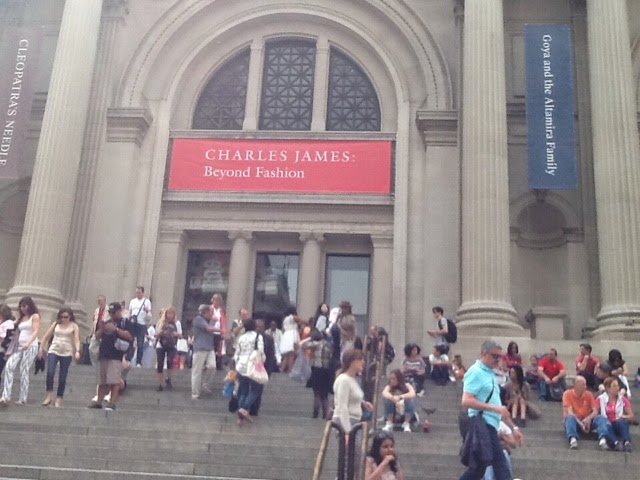 The differences in rain reactions here and in New York City as as different as the culture.  As I look outside, I see the flow of rain as a great illustration of the flow of life on two coasts, east and west, fast and slow, harried and relaxed.
Posted by Susan Gallacher-Turner at 2:53 PM No comments:

Biting into the Big Apple. 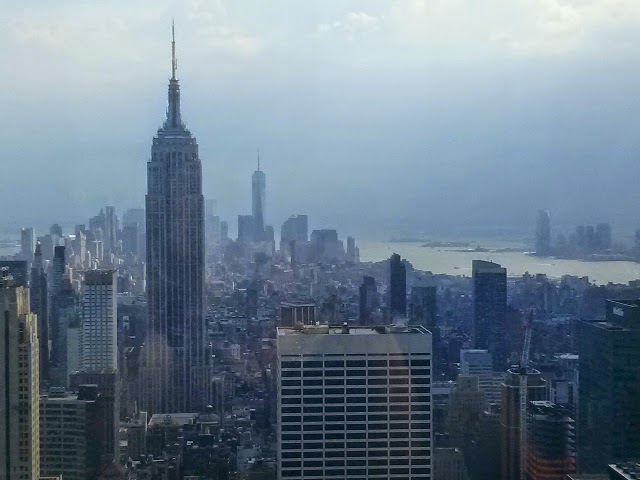 I've never been to the Big Apple, but I've heard about New York City and Manhattan, Central Park alll of my life.  My mother was born and grew up on the Upper West Side of Manhattan.  And I think part of her never left.
As a child, I learned the importance of walking with a purpose, as fast as you can, keeping your eyes ahead of you, and not smiling or saying anything to anyone on the street.  I was taught it was rude to walk 3 'abreast'.  Walking in 2's was only acceptable when there was room for people around you and if needed, you were to slide back into single file. 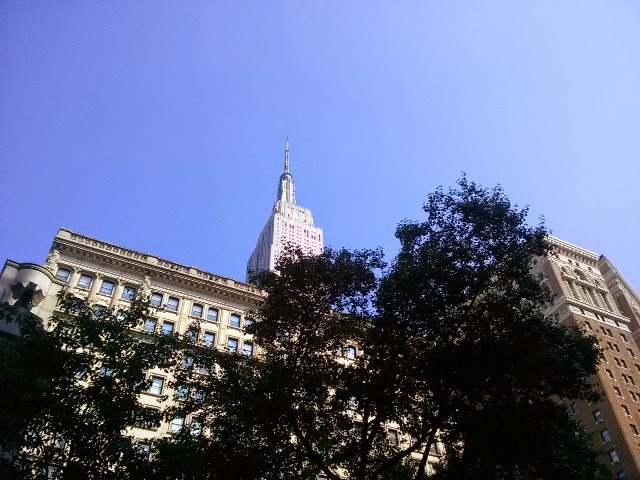 (Empire State building from Herald Square &34th)
As I grew up, people commented on my fast paced walking style.  Some thought I was unfriendly or rude as I charged down sidewalks looking only ahead of me.  I didn't understand, you see, I'd been taught by my mother that this was the proper behavior.  The problem was that we lived in the suburbs of Michigan, Ohio and Oregon where people stroll, hike, greet each other with nods and smiles.
I was trained by a native New Yorker.  When we hit the streets in Mid-town Manhattan, I fell right into the flow. 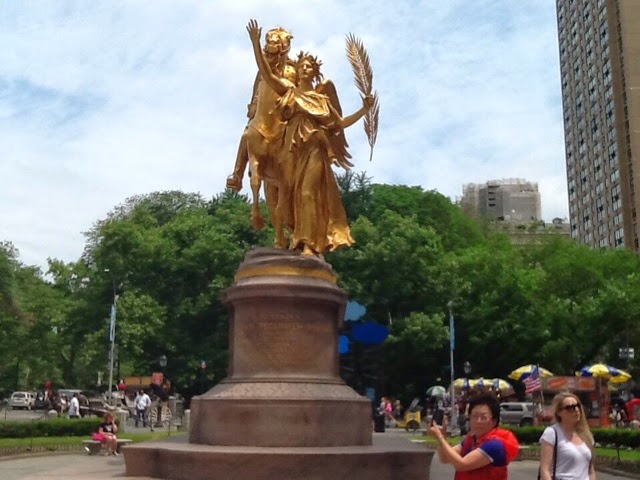 (Central Park entrance, 89th)
It was easy to get around.  We walked everywhere and, yes, we even jay walked like the natives.  There was a lot see and do...from Central Park, Metropolitan Museum, Times Square, Empire State Building, The Top of the Rock, Rockefeller Center, Broadway to Herald Square, MoMa, New York Public Library and Bryant Park. 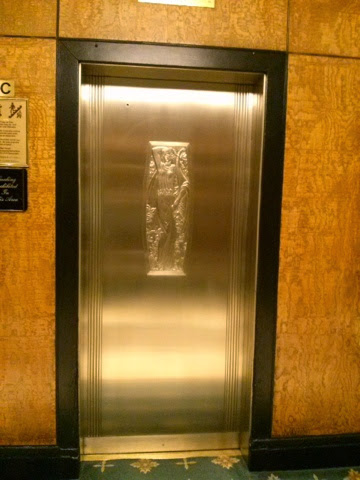 (Waldorf Astoria elevators Lexington side)
We stayed at the Waldorf Astoria.  Filled with marble statues, deco adorned elevators, mosiac inlaid tile entries and a huge gold clock in the lobby.
We saw Wicked on Broadway.  We ate at delis, a small Italian cafe, got take out from Grand Central Station market and ate at Bryant Park. 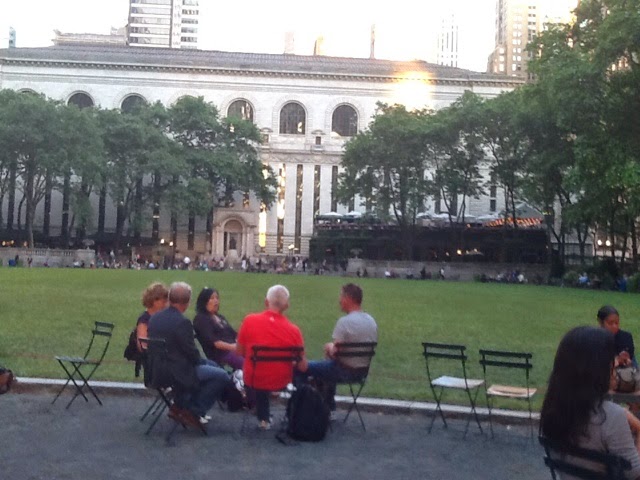 (Bryant Park)
This park, located behind the NY Public Library, is a big space surrounded by skyscrapers with a large patio restaurant, a carousell and kid space, another bar/restaurant where they were playing bingo, food carts, a reading area with books from the library and a big lawn area circled by hundreds of bistro tables and chairs filled with people eating and chatting. 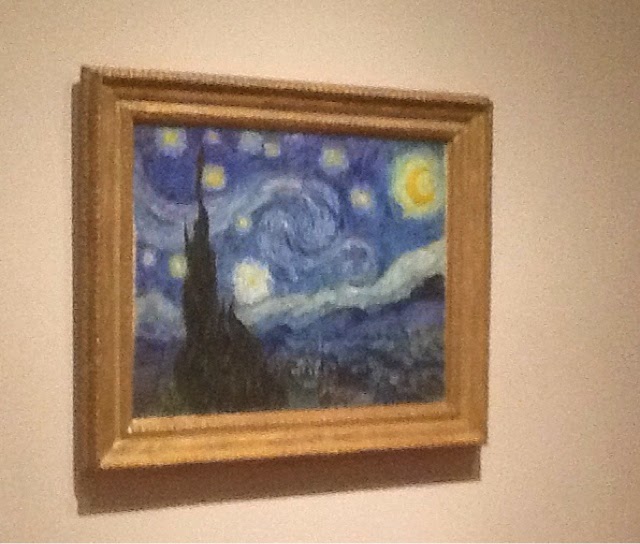 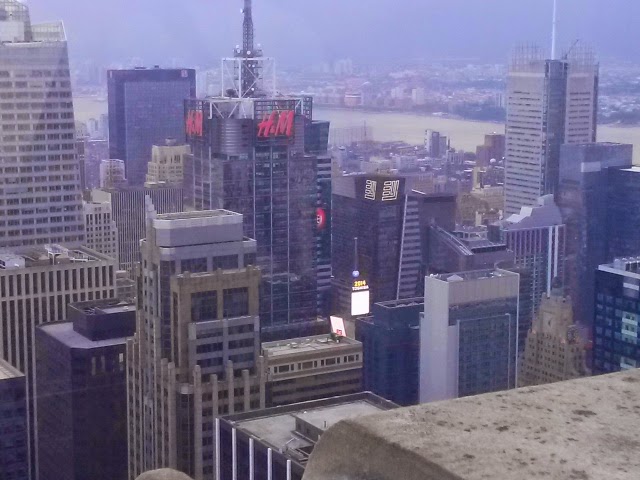 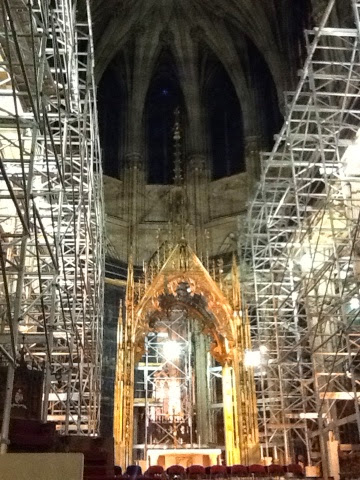 (St. Patrick's)
St. Patrick's Catherdral was undergoing a huge rennovation but so was most of the city.  Scaffolding was everywhere and walked through and around by all the natives with no notice. 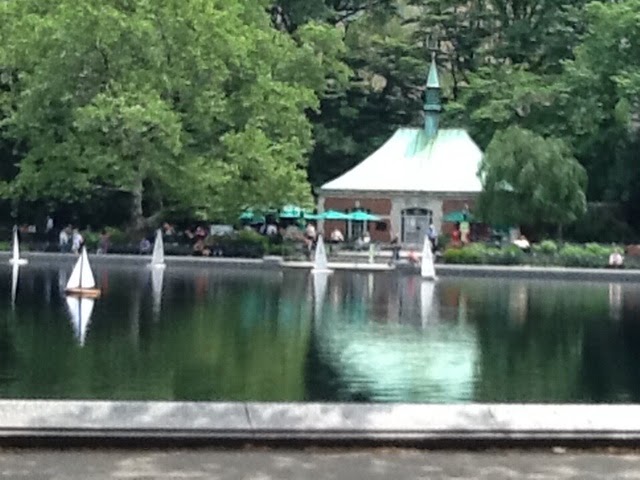 (Central Park sailboat pond)
Central Park was a beautiful oasis in the midst of skyscrapers.  And the only place we noticed the natives walking in groups, slowly, sitting on benches talking and eating and walking dogs. Although, it was obvious the people with the dogs were dog walkers, not dog owners. 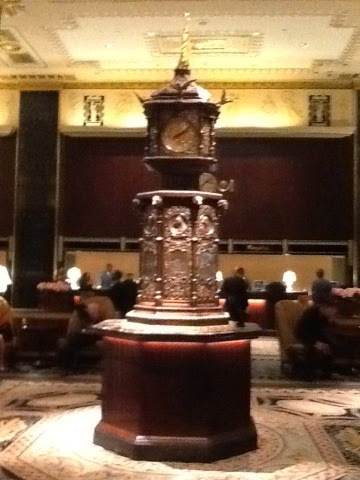 (Lobby clock in Waldorf Astoria lobby)
All in all it was a fast and fun four days.  For years, I've been out of step in the suburbs, but thanks to my mom, I fell right into step on the streets of Manhattan.
Posted by Susan Gallacher-Turner at 10:54 AM 2 comments: